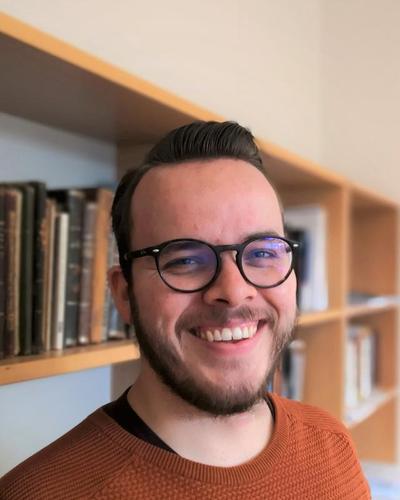 On the 28th of January 2021, Kristoffer Økland, PhD-candidate in the Study of Religion at the Department of Archeology, History, Cultural studies and Religion, University of Bergen, presented his research on the school and youth experiences of Norwegian Jews for his thesis on the same subject.

Through narrative interviews, he finds that his young interview participants talk about their experiences of being categorized in various ways as Jews throughout their youth. Yet he also finds that they talk about practices of negotiating these categories in various situations. Exploring the interview participants’ focus on these topics in the interview, he explores the content of the categories young Jews feel that they are placed within, and how they negotiate these categories, and consequently how they negotiate their Jewish identities.

1) the discursive categorizations -the descriptions of Jews ingrained in language and discourses, including jokes about Jews and the use of “Jew” as a derogatory word).

2) The political categorizations – how they are ascribed political opinions towards Israel and the Israeli/Palestinian conflict, as well as being ascribe an Israeli national identity because they are Jewish.

3) The curricular-based categorizations of Jews – categories found in the misrepresentation of the Norwegians Jews as predominantly Orthodox Jew in religious education.

He finds that young Jews negotiate these categories in seeking to free themselves to explore various identities on equal terms with their majority peers, independently of the negative categorizations of Jews they feel subjected to. They negotiate these categories by taking the role of a representative for Jews in school and public, by explaining or satirically expressing the absurdity of Jewish stereotypes to the individuals using these stereotypes, and by negotiating what it means to be Norwegian, to allow Jews to be Norwegian, but also Norwegian-Israeli.

The discussion following his presentation explored the ways in which categorizations of Jews are negotiated in a way that do not necessarily broaden the categories of who Norwegian Jews are. Rather a different, almost equally narrow category of Jews might be defined. The discussion also addressed how negative categorization of Jews is more often encountered by young Jews than by individuals belonging to older cohorts, as well as addressing the unrepresentative presentation of Jews in the Norwegian RE curriculum.